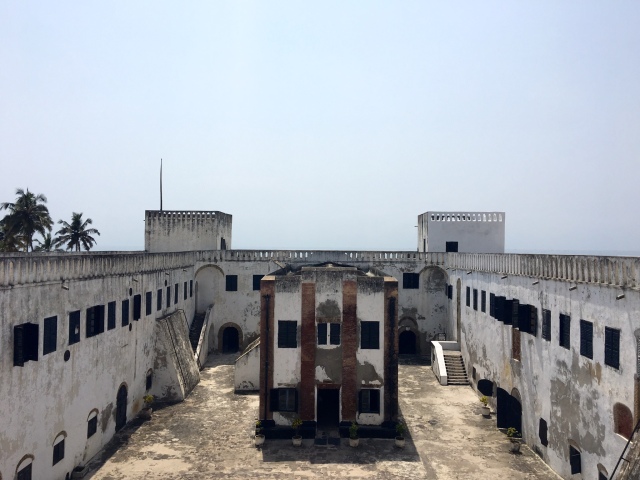 When Kwesi told us last night that breakfast would be served at 7:30, I groaned. To me, still completely jet lagged and on eastern standard time, 7:30 am would feel like 2:30 am. However, when my alarm went off this morning, I threw on my glasses and went to grab breakfast without complaint. We were going to the beach today and if I had to wake up at 7:30 to get there, then that’s what I was going to do. It would all be worth it to go to the beach.

At 8:15, the van rolled out for Elmina Slave Castle and then for Coconut Grove, the beach resort we’d be spending the day at. In total, it was an hour and a half drive mostly along the coast. Though still the Atlantic, it was so much cleaner than its Jersey Shore counterpart.

One thing that struck me most about the day was the size of the slave castle. I had this idea in my mind that it would be this massive structure, but it wasn’t. It was small. From the various history classes I’ve taken, I was pretty sure of just how bad the conditions the slaves lived in were. Seeing the castle, however, I realized just how wrong I was– it was so much worse. I don’t even have words to accurately describe what I saw. It was eye opening to say the least. The depth of suffering imparted on an entire race of people is beyond comprehension, and the pain that those walls held will never leave me.

Though the morning was somber with our tour of Elmina Slave Castle, our afternoon was the complete opposite (a very odd transition in my book). We spent the whole day at a beach resort!! There was a pool to swim in, beach chairs to lounge in, and coconuts to drink from, all with ocean views. The day was made even better with Lynette’s promise of returning next week!

There was an error retrieving images from Instagram. An attempt will be remade in a few minutes.