I’m continuously astounded by how much music there is in this city. It’s impossible to walk out into the streets without hearing something. There’s bands playing on rooftop restaurants, restaurant patios, pop up venues in parking lots, and in the streets. It’s really incredible to be surrounded by so much live music. This trip has been really eye opening to me because it has solidified the idea that music is the only thing that can connect people so deeply and viscerally. People have come from all over the world to Austin for a week of music and I find that really incredible. Nobody cares what the artists look like or where they’re from, it’s all about the art they’re creating. If the music is good, everyone is happy and if it’s not so good, people just move onto the next venue. 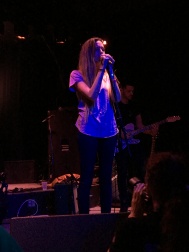 Something that really highlighted this for me happened last night. I went to a showcase to see a girl called CLOVES perform and after she finished her set I started talking to her. She lives in England and most of the people who write for WTGR also live in England. I mentioned to her that I write for WTGR and we’ve covered her a few times she immediately brightened and said, “Oh yeah I know Matthew, he’s wonderful!” Matthew is another writer for the blog and he lives in Cambridge and I thought it was so cool that the three of us were all connected by music, despite never meeting in person before.

She was one of the many incredible acts I was able to see yesterday. I went to a daytime 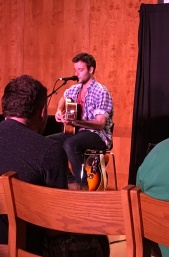 party where I saw Declan McKenna, a 17 year old guy from England, and he was so impressive. It was just him, his guitar, a keyboard, and a vocal looper on the stage and he was able to create a fully fleshed out sound all by himself. I also saw KLOE from Scotland and her set was very nice too. In the nighttime I saw Roo Panes in the same church I saw Clara-Nova and he was absolutely incredible. It was a very intimate show with just him, his guitar, and an audience of maybe 20 people. Later I saw KYTES, a four-piece band from Munich that makes upbeat indie pop, and The Young Wild, a Californian band that draws influence from their sunny state. I’m sad that there’s only two days left of SXSW, but I’m so glad that I’ve had this experience.

The second day here was full swing and full of music. I went to an unofficial showcase

today called The Yard and it was fantastic. I heard some new music and some music that I’ve been listening to and dying to hear live. There was a great variety of bands and the atmosphere was very laid back. The highlight of that showcase was Fickle Friends, a band from the UK. I got to chat with the lead singer, who was very nice. She’s friends with Andrew, the editor/founder of WTGR, and we had a short and sweet conversation about their friendship and other shows they’re playing this week. 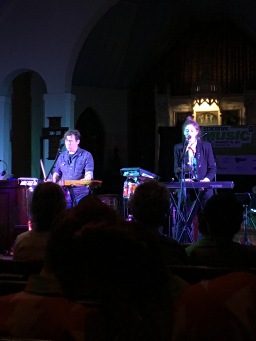 I just saw Clara-Nova play in a beautiful church and it was quite the experience. Clara-Nova have a really great electronic sound
and I’m so glad I got to see them. It was a lady and a man who played about 6 instruments between the two of them and it was a
wonderful spectacle. The lady did the lead vocals and she was absolutely mesmerizing, despite the distraction constantly switching instruments. The setting of the church made the whole thing very ethereal and atmospheric. I doubt there will be another set that lives up to that one this week!

In a little bit I’ll be setting out again to see Alice on the Roof, ELEL, and Daniel Ellsworth & The Great Lakes play a showcase. It should be an interesting show since it’s a bit of a mix of genres.

I’m loving Austin so far. I feel like SXSW is the American version of Carnival in Rio because it’s one giant street party with all sorts of performers and food trucks. It’s a lot of fun, but also a great opportunity to talk with musicians. Something that has stuck out to me is how everybody here is so friendly and open to conversation. I feel like music drops the pretense here and everyone is just here to enjoy the tunes, not use it as a chance to brag about which musicians they know and what they listen to. Everyone is very genuine and it really is all about the m
usic here. Musicians are super open to talking to everyone and nobody in the audience is rude or pushy. It’s a great reminder of why live music is so important. It brings people together in the most enjoyable way possible and it connects us through the shared experience.

It’s a hot day here in Austin! The city is crazy with all the shows, expos, and film screenings happening. It’s incredible to see so much going on at once and so many different people gathered for their shared interests. We’re lucky enough to be staying one street away from 6th St, which is where almost all of the SXSW official showcase venues are located. It’s basically one huge avenue that has tons of bars, restaurants, and concert venues. Clearly Austin is a music city because there are tons of official street signs that say “No parking, musician loading 7 pm – 3 am” all down the avenue, which I find awesome.

It’s the very first day of the music portion of the festival, so not much is going on in that department except for a few showcases tonight and the talks held in the Austin Convention Center. I attended two talks today, “Building the Galleries of the Future” and “Rotten Tomatoes: Your Opinion Sucks” . The first one was super interesting because it talked about how we have the technology to essentially map out a cultural landmark (like Mt. Rushmore or Mayan Ruins) by using 3D lasers to plot points on an XYZ graph, then project those data points into an exhibition space so people can interact with the site as if they were there. It was a panel of 3 people who are involved in this work, a representative

from CyArk (the non-profit organization that goes and gets the data with lasers, drones, cameras, etc), a representative from Seagate (a data storage company that holds the large files CyArk and other companies have), and a representative from Ars Electronica (an Austrian ‘museum’ that exhibits digital and electronic arts). They talked about how critical it is to save this information, especially for places like Palmyra that are being destroyed because of the political landscape, and add the human aspect to it. These new technologies will allow us to not only understand the sites themselves, but the human stories and history behind them. The second talk was a very interactive one. People would say a movie or tv show that they thought was “fresh” or “rotten”, defend their opinion, then professional critics would give their opinion. There were 3 critics, Alonso Duralde, Meredith Borders, and Scott Mantz. 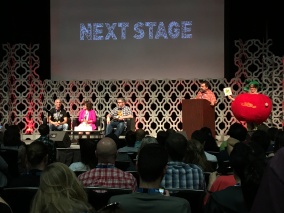 The most argued about movies were Mad Max: Fury Road and Star Wars Episode 1: The Phantom Menace. This talk was more entertaining than informative, but it was interesting to see people dissect movies from a consumer/viewer point of view versus a critic’s view. The audience was more interested in the general feeling the movie/show gave them and how entertaining it was, but the critics focused more on the artistic parts of the movie like the score, the direction, the costumes/accuracy.

Tonight I will be heading to an official SXSW showcase that focuses on artists from Austin. It’s going to be a huge mix of styles, but I love the idea of showcasing Austin artists on the first night of SXSW. Tomorrow I’ll be hitting up the unofficial party at The Yard to see some acts that I’ve been following and blogging about on WTGR, like Hunny, Fickle Friends, and Flor. I’m excited to see the city tonight and explore some more tomorrow!