The Wi-Fi has been broken at World Friendship Center. Sorry for the late post.

The day I spent at Hiroshima Peace Memorial Park was indeed a meaningful day in my life. The weather was awful, with pouring rain and unbearable coldness.  On Wednesday at 9:30 in the morning, I entered one of the meeting rooms in the Peace Park Memorial to meet with Mrs. Kasaoka, 78 years old, a hibakusha survived the Atomic Bombing in Hiroshima, 1945.

There were about ten guests in the meeting room hearing Mrs.Kasaoka’s story, besides me, two were from Canada, and the rest were all Japanese. The story was being told with a translator standing aside translating after one or two sentences were finished telling by Mrs.Kasaoka in Japanese. Kasaoka’s story was extremely powerful. At some point I was almost in tears. When the bombing occurred, Kasaoka was only thirteen years old. She lost both of her parents on Aug 6th, 1945, leaving an irremovable mark in her memory of the war.

I am sure that stories alike Mrs.Kasaoka’s were millions out there, but what I got the most out of her story was the calmness on her face and her determination to promote peace in the world, not hatred or any negative feelings. When talking about WWII, Chinese people automatically express their hatred toward Japan. Note, it’s Japan, including both the government and the people, not only the army. But Chinese people never think that Japanese people, the ordinary civilians did nothing wrong, and they are also victims of the war. Before my visit to Peace Memorial Park, I was not sure about what kind of feelings that Japanese people have toward America, who dropped the atomic bombs. I was amazed by the theme of the park — peace, instead of blame or hatred.

“I hated America, but gradually I grew out of those feelings. Now I hate the A-Bomb itself. ”

“The way to live is with love.”

“We always have fears (radiation). We should not have the 3rd A-Bomb. I’d like to convey that things like A-Bombing should not, and must not be repeated.” 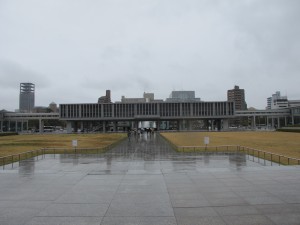 In war we are all victims. During my stay at Hiroshima, I had two personal interviews, in order to gain a board perspective of the Pacific War. One interview I had was with Barb Siney, from Ohio, the co-director of the World Friendship Center. She gave me a general perspective of American’s role in the Pacific War. The other interview I had was with another guest at WFC, who is from Thailand and is now a student at Tokyo Institute of Technology. She told me Thai people’s views and positions in WWII while under Japan’s occupation. I gained lot information through these interviews. When I finish organizing my notes, I will be able to write up a great research paper on this topic.

I don’t know how much of my goal — promoting peace–has been achieved. However, I think simply my presence in Hiroshima as a Chinese teenager already meant a lot. I appreciate this opportunity that enables me to look at a sensitive topic from a different angle. Although I only had a full day at Hiroshima Peace Memorial Park, what I saw and heard already makes my Senior Project extremely meaningful.

Now I am back in Tokyo and will return Beijing in three days.