I think it’s safe to safe I’ve accomplished a lot since last Friday.

I supported Planned Parenthood amidst a thronging crowd of 6,000 liberals and lesbians at Foley Square; I bought a new book by one of my favorite authors… and finished it; I had at least three, long, romantic conversations with strangers (and knowingly broke the most widely quoted rule of childhood); I went to a gallery opening in midtown, and another in Chinatown; I watched an almost painfully philosophical animated film about dreaming (no, not Inception) and later the Oscars (though not Inception); I went to a newly opened gallery show and met the artist (and his two pet goats, who wandered around as part of the exhibit); I walked behind Lady Gaga and made funny faces for the paparazzi taking her photographs; I composed a print to later be signed and completed by my boss, and I walked around the almost never-ending Armory Art Fair with the wisest possible of constant companions (Baechler himself).

A wise writer would have broken it up; just editing leaves me breathless.

For those of you that skipped the dense paragraph at the top, I’ll start with Saturday.

I woke up fairly early Saturday morning, with high hopes of making it to the start of the Planned Parenthood Rally in Foley Square, where one of my favorite bands (The Mountain Goats) would be supporting one of the  most deserving causes (Planned Parenthood,  which was proposed to be cut from governmental spending by the GOP to reduce the deficit and *punish abortion-lovers and baby-killers,* although, at least in my opinion, there would be far more abortion if women couldn’t have access to the free and accessible healthcare and sex education provided almost exclusively by Planned Parenthood).

Long story short and more sarcastic, the stimulus bill (and the improvement of public transportation and roadways) caused my subway to take me halfway through Brooklyn en route to Lower Manhattan (making what should have been a 15 minute ride a 50 minute one), and losing me my face-time with John Darnielle, lead singer of The Mountain Goats. *Whine!*

It was not all bad, though. The ill-placed track work gained me a friend – a beautiful young Parisian girl just as lost as me, if not a little more. She was headed for City Hall as well, (City Hall was the closest subway stop to my destination) on her last day of touring the city before heading back to France and school. We talked about our schools, (she was in 12th grade as well), and our plans for the future, as well as tipping each other on the most important unseen parts of the city.

We said goodbye under a rainstorm of pigeons, as she headed towards the Brooklyn Bridge with her Leica, and me towards the rally with my Holga. (Photography was, as we learned, a shared interest).

Despite missing the Mountain Goats, I did get to see a really wonderful Ukulele  player (Nellie McKay) and an endless string of liberal politicians and grateful patrons of the organization, as one after another they stood and spoke about their tireless devotion to Planned Parenthood. 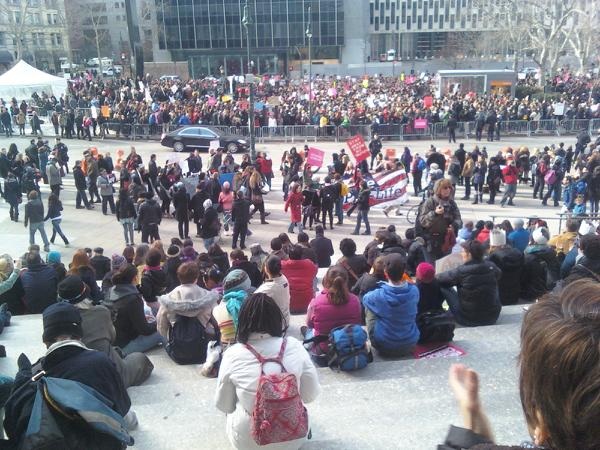 After the rally, I wandered uptown, browsing through SOHO’s Broadway, and traipsing through the aisles of outsider boutiques and Chinese wholesalers (you can’t beat Pearl River… I got the most beautiful silk robe for $30!), until I reached Union Square and The Strand used bookstore, or, as I like to call it, Heaven.

I could write novels about looking through all the novels in there.

Most significantly, though, I bought the book A Gate at the Stairs by Lorrie Moore, whose short stories I’ve been digging up from all my old New Yorkers, and I met a dashing playwrite over a copy of Kafka’s Selected Short’s, who composed for me a lengthy reading list, among other things, and invited me for coffee.

The day ended tiredly, with sore feet from all my walking, and giddy smiles for all I’d seen and done.

Sunday and Monday we’re duds, with too much sleep and lazy movies, split up only by a little more laziness and Oscar-watching (Natalie Portman – how fabulous!), as Donald was out of town  and there was little to be done. I did get some painting done, though, finally remembering how airless my basement studio was after hours of paint fumes started to get to my head. Maybe that’s why I don’t remember much from that day! Oh well; Tuesday was marvelous.

Donald didn’t come into work again on Tuesday, though I had expected him to (as one assistant says, in the art world you have to choose between a boss who’s always there and always looking over your shoulder, or one who’s so laid back he’s unpredictable), so I stayed in, working on my artist’s book and helping photograph some of his earlier works.

Afterwards, I met up with two friends to see a gallery opening in midtown, where we talked laconically to the different artists involved and busied ourselves with observing the hipness of our surroundings, as I’ve spent much of my time here doing.

We finished the day with the tastiest Mexican food I’ve had in a while, and a sleepy train ride over the river to New Jersey, where shut-eye prepared me for the rest of an ever-intensifying work week.

Wednesday started off with a bang, as I went with two of my coworkers to their friend Darren Bader, who was showing at the Andrew Kreps Gallery in Chelsea. His work was fresh and interesting: a mixture of painting, sculpture, photography, music and film that captured the stark humor of the surreal and extraordinary, topped off by a pair of friendly goats that wandered the studio as we looked. I met Darren and took a photograph with him before walking back with the others, who had excitedly taken an artist’s book of his and fliped through its pages.

We stopped in Whole Foods before returning, and talked deeply about our impressions of Darren’s works. Once back, Donald had arrived, and we got to work photographing and cataloguing a bottomless pile of prints, each one intriguing and frightening and funny.

A bit later in the day, Donald took me with him again to Pace Prints, the printmaking studio that has been helping him with a series of monoprints to be shown in May at their associated gallery in Chelsea. Almost immediately, as I stood watching him compose the first series of woodcuts to be printed, he asked me if I’d like to compose one. Duh!

I happily arranged the carved, wooden faces in the jigsaw-like manner that he was using, choosing some of my favorites from the heaping pile on the table next to me. I quickly realized how much harder his job was than it looked, as he whipped out one after another before I’d even placed the core faces.

‘I’m done!’ I called, and he came over, smiling, and adjusting them only slightly, before giving me an approving look and tracing their shapes on the plexiglass to be printed. The other assistants congratulated me jealously as they saw my finished work, and I tried to hide my gloating pride. 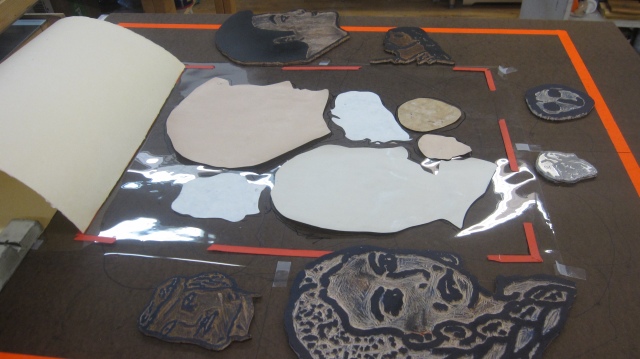 (Two prints in the works, the bottom one I composed) 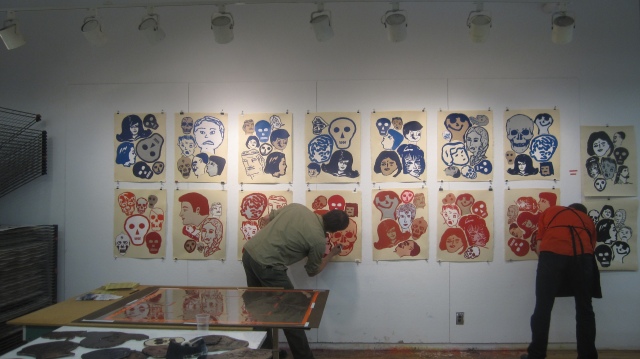 (The photo on the top shows two assistants re-touch some of the prints before signing, and the print on the bottom-right was composed by me)

Thursday, like Wednesday, started excitedly, as I walked behind the uncharacteristically normal-looking Lady Gaga on her way into Fuse NYC, a music television production studio, and dodged the mosquito-like paparazzi as they flocked around her, and, by proximity, me. Thank god I’m not famous.

I waited around the studio as Donald had meetings with various collectors and art dealers for our promised trip to The Armory, a relatively new, but increasingly important art fair on the piers of the Hudson River. The Armory takes up all of piers 92 and 94, and has, by now, spilled out into many smaller art fairs and shows across Manhattan.

While overwhelming, the Armory was incredibly inspiring; it encompassed in just two piers basically everything going on in contemporary art around the world, as well as a great deal of modern and post-modern works by almost every famous name in the business. And to have Donald as my tour guide – it can’t get any better! 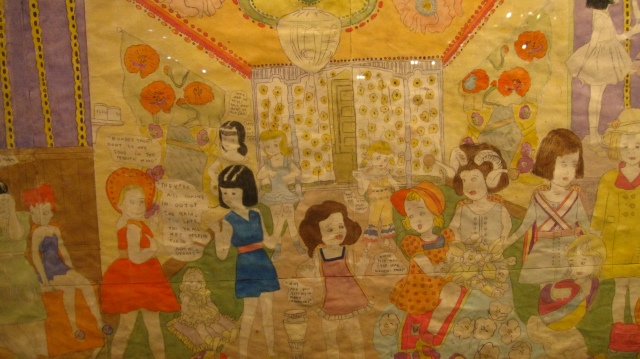 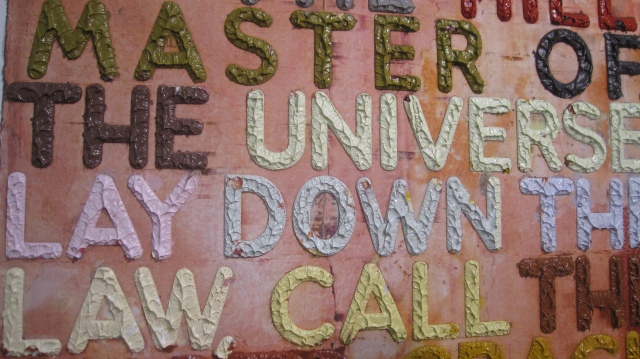 All in all, my week has surely been one to remember, and as I’m sure you’ve seen, one with lots to talk about (I’ve left out so much even still!).

Tonight I’m off to see a coworker in an original musical called ‘Upon My Word,’ which she described as a ‘victorian sex comedy’, and later this weekend, I hope to check out a few of the fringe festivals happening around the city in the wake of the Armory.

I’m sure you’ll hear more from me soon!

One thought on “Week Two at the Studio – Emily”