I am Lynette and together with Teacher Jorge we are chaperones on the Senior Project/Spain Exchange program.  Our grand adventure consists of two parts: walking the Camino de Santiago and studying the language, culture, art and architecture of Spain in Barcelona. 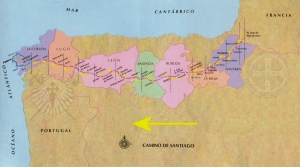 We will begin our trip with the Camino de Santiago, the Way of St. James. This pilgrimage has been made by the faithful for about a thousand years, and follows the path of legend that St. James the Apostle’s remains made. St. James’ final resting place was Santiago (which means ‘St. James’) around which the cathedral and city was built. In the middle ages the Camino was a strictly religious rite, but in the 20th century people began to come from all over the world to walk the Camino for reasons as varied as the individuals who undertook it. An estimated 200,000 pilgrims (peregrinos in Spanish) don their backpacks and make the trek to Santiago de Compostela each year. The Camino was named a UNESCO World Heritage site in 1987.

There are several routes to Santiago on the Camino. The most common is the Camino Frances which begins in Roncesvalles, France and takes four or more weeks to complete, depending on pace. We will be on the Camino Frances, but will begin in Sarria, Spain and walk the last 72 miles, since this is all that time allows us.

During the walk through the hills, fields and towns of Galicia, we will be considering and discussing queries (in Quaker tradition) that we’ve given the students. We will reflect upon things like:  What does it mean to be a pilgrim? How you cope with discomfort and pain, both physically and spiritually? What do you hope to gain from this experience? We all will be journaling about our reflections, and I will write about them here. I have been to Santiago and even been inside the cathedral, which is an imposing example of Gothic architecture. But it will be something quite different to cross the threshold of the cathedral with students after walking together for five days in rain and shine to behold the statue of St. James, which has been touched by millions of pilgrims for a millennium.

After the completion of the Camino, we will give our well-worn feet a rest and fly from Santiago de Compostela to Barcelona. Students will live with families and attend Aula Escola Europea with their host students. We will have excursions to important monuments and sites, as well as to the neighboring towns of Girona and Figueres (the birthplace of Salvador Dalí) . Barcelona is home to some of the most stunning examples of Modernisme, a cultural, art and architectural movement typified by the works of Antoni Gaudí.

I am thrilled to return to Spain and to experience the Camino for the first time. I am most looking forward to being with students as we take this spiritual journey together. It’s as much an inward journey as it is one toward a destination. What will we discover about ourselves? About each other? About other pilgrims we encounter along The Way?

We are peregrinos. !Buen camino! 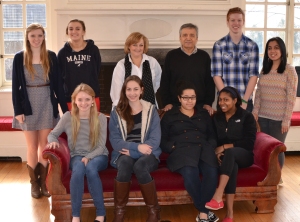 Not pictured: Lindy, Caroline and Steffanie (but they’ll be in the next one!)

One thought on “Peregrinos”