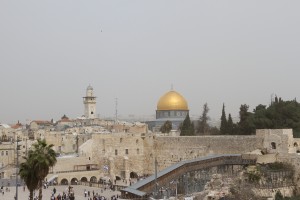 When talking about settlement, most people would think of Israeli Jews building residences and settling into Palestinian areas. But settlement can also mean cultural invasions. This morning, with a tour guide who is a Muslim born in Jerusalem, we strode through the Old City and covered the Islamic, Jewish, Christian and Armenian quarters. Each quarter has its own culture and religion; each cultural group tries to present themselves in the most prominent way. Christians have the Church of the Holy Sepulcher on the site where Jesus was crucified; Muslims have the Dome of Rock with the Koran carved on the inside walls; Armenians also built multiple churches; and Jews pray at the Western Wall of the Temple Mount. Each group wants more power. There is constant fighting among religious extremists, but the most controversial issue is the idea of rebuilding the Jewish Temple at the Western Wall. I realized that Israel-Palestine conflict is only part of the big conflict.

In the afternoon, we were joined by Angela, a guide from the Israeli Committee against House Demolitions who talked about Israeli settlement on Palestinian lands. As an example of the effect of Israeli settlement, she took us to visit the Jahalin Bedouin Camp. The Jahalin family was forced to leave Jerusalem and they are currently in a dilapidated village right outside of Jerusalem. Eid, the head of the family, fought for better living conditions—lands, water, electricity and schooling—with his Israeli settler neighbors. For the most times, not only did he not get what he asked for, but also gained more problems. Israeli government constantly tries to make his family move by expanding the settlement land, cutting off his water supply, conducting military drills, or not prohibiting major constructions. Living and learning from conflicts, however, Eid has gained support from the UN, Palestinian Authority, and the EU to build a school for local refugee kids. “In ten years, I only can live here if the international community stands with me,” Eid said in the end, “the only way you can help is to have your governments to put pressure on the Israeli government.” 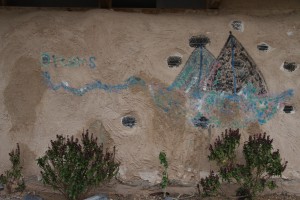 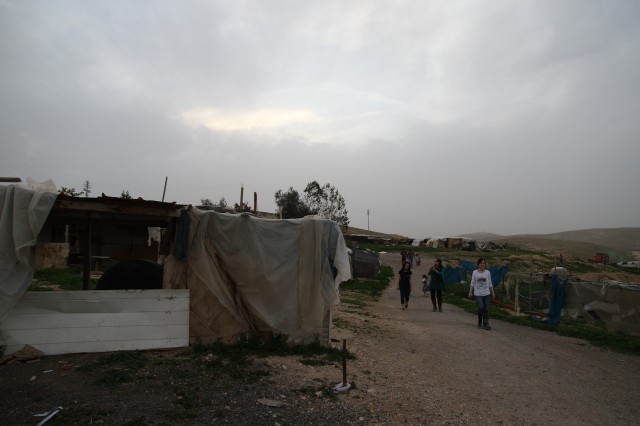