The Green Line, officially called the 1949 Armistice Line, is not actually a green line painted between Israel and Palestinian West Bank. 1949, in Rhode Island, several Israelis and American Ralph Bunche drew the line based on geography; Israelis then planted trees along the border therefore gave it the name the “Green Line”. But today, on a tourist map bought in Israel or a map in an Israeli geography textbook, the Green Line is nowhere to be found. Instead, a fence is built nearby.

In the beginning, the fence was built along the line, but it diverges to include more Israeli settlers. We stood on the top of a hill over the town Anin. Hundreds of residences cluster in the valley and on the side of the hills. On the hills not far from Anin, there are a couple Israeli settlements on the other side of the fence. This is where the fence diverges with the Green Line. In between the two lines are Israeli settlements and Israeli Arabic communities that can no longer be in contact with families in the West Bank.

We soon stopped at a check point at Shaked. Our guide, Lydia Aisenberg who founded the Givat Haviva Center (where we will visit tomorrow), persuaded a group of soldiers at the check point to converse with us. It is rare that tourists can communicate directly with soldiers. The average age of this unit we met is around 21. After getting to know our purpose of visiting, the soldiers were relieved and started to smile. It occurred to me that they are still just kids at our age, in spite of the heavy weapons they were holding. They were there because it was part of their duty to their country. Check points are made to secure local communities’ safety from terrorist attack. Each year, there are over ten bombings along the boarder—extremists attack public buses with suicide bombs. A soldier who lives only 5 minutes from the check point told Lydia, “I’m protecting my family.” I saw that these soldiers are not just beasts, but humans like every one of us who have an incentive to keep their families safe.

The major controversy the Green Line and the fence have created is the inconvenience and inequality to Palestinian communities. Barta is in the bottom of a valley. After the Green Line was drawn, the town was split into two with a quarter on Israeli side and three quarters under Palestinian Authority control. Israelis are free to cross over but Palestinians are constrained. A family on the Palestinian side can no longer buy groceries in the store a block away in the Israeli territory; and Palestinian children are denied by schools on the other side.

Around every Palestinian community, there are always Israeli controlled “A” areas and Israeli settlements, and “around every Israeli community, there is always a fence.” Palestinians on the West Bank have been confined into isolated small areas where almost every resource depends on Israeli government. On the way back from Bartar, in the direction of sunset, we saw four chimneys, marking the shore of the Mediterranean. “On a clear day, kids from Palestinian Bartar can see the sea, but they will never get to go” said Lydia. 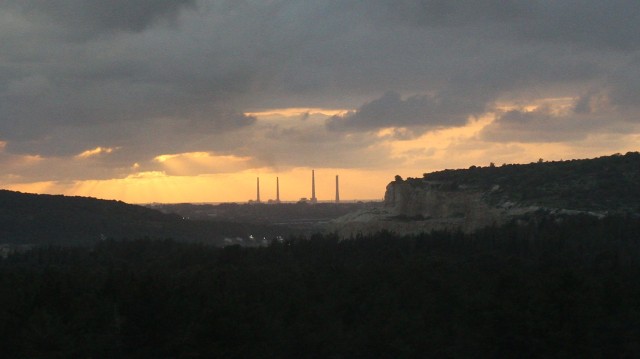