Tonight is the much-anticipated weekly Members’ Night at the Field Museum! What that entails is the museum staying open late so that members can tour the usually behind-the-scenes parts. I think there may also be free food involved, but I’m not sure on that one.

Anyway, we spent the last few hours today setting up for that. We’ll be displaying an Uinathere (if you want a good laugh try to pronounce that) jaw and a cast of a full head… 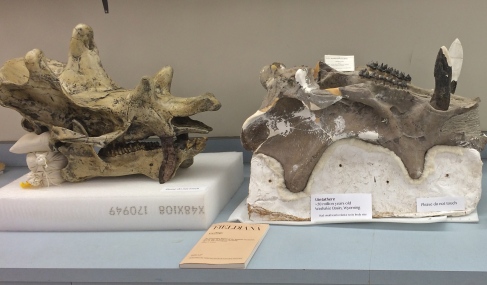 …as well as a few other things showing steps in the fossil prep process, including an example display assembled by your humble narrator! I couldn’t stay late enough to be at the event itself, but having one of my displays shown was definitely the highlight of my day.

The last couple days have been a bit crazy. Now that my newbie training’s over, I’ve still been doing a lot of cataloging and numbering and making displays, but I’ve also been washing and repairing fossils which is super rad and much more hands-on. Basically, when fossils come in, they’re not the neat little (or huge) bones that you see behind glass. They’re almost always in these weird plaster bags that are full of dried mud and rocks (and maybe a tooth somewhere in there). You have to put this chunk of stuff in a sieve and run water over it. Most of the silt comes off pretty quickly, and as it goes from one big thing to a lot of little things, you have to decrease the water pressure so as not to damage anything. Eventually you wind up with a sieve full of rocks and fossil bits, which you have to separate, and then the fossils get another rinse before being set out to dry. It beats dinner wash any day.

Repair, which was actually the part of my internship I was most excited about, is a total pain in the you-know-what. After all the bone bits are clean and dry, they get organized into boxes by site and then you have to repair them. This translates to: sit and stare at a box of bits of things and try to figure out how they fit together, if they were even from the same animal to begin with. It’s like the most frustrating jigsaw puzzle ever, except there are three different puzzles mixed together and half of the pieces are missing and there’s no picture on the front of the box. If the three of us working down there can get more than five or six matches in a day, it’s pretty successful. We got a whole rib (about two feet long) pretty successfully fixed up on Wednesday, and my manager bought everyone lunch.