Leaving DC’s Dulles International airport at 12:20pm on March 7th, the fourteen hours and 6900 miles we had to go seemed incredibly daunting. Our eleven-person group got through the plane ride mostly by listening to music, watching the movies provided, and most importantly, sleeping. Looking out the window as the pilot announced we were approaching Beijing’s airport, it still looked like we were ten thousand feet in the air in the middle of the clouds. It wasn’t until our wheels hit the ground that I realized we were in the infamous smog of Beijing. I couldn’t see any hint of a city as we landed because of the extent of the smog. We finally arrived in Beijing at about 3:30pm on March 8th. After getting through customs and getting our bags, we met the representative from CLI (the group we were using to guide us through China and our tour guide for Beijing). The CLI representative’s name was Brian, he was a twenty-four year old graduate of James Madison University who had been living in China for the past two years. Our tour guide’s name was Jack, he was born and raised in Beijing but spoke English fairly well. He always had a big smile on his face and seemed to know everything there was about the city. We all boarded the van we would be taking around the city for the next five days and drove about an hour to the hostel we would be staying at for the next five days. Our driver’s name was Mr. Lee, he was a fairly quiet man but a very reliable driver in a city which seemed to have few rules for driving.

This is the first view of Beijing we had after stepping out of the airport. Our van was very similar to the one in the picture 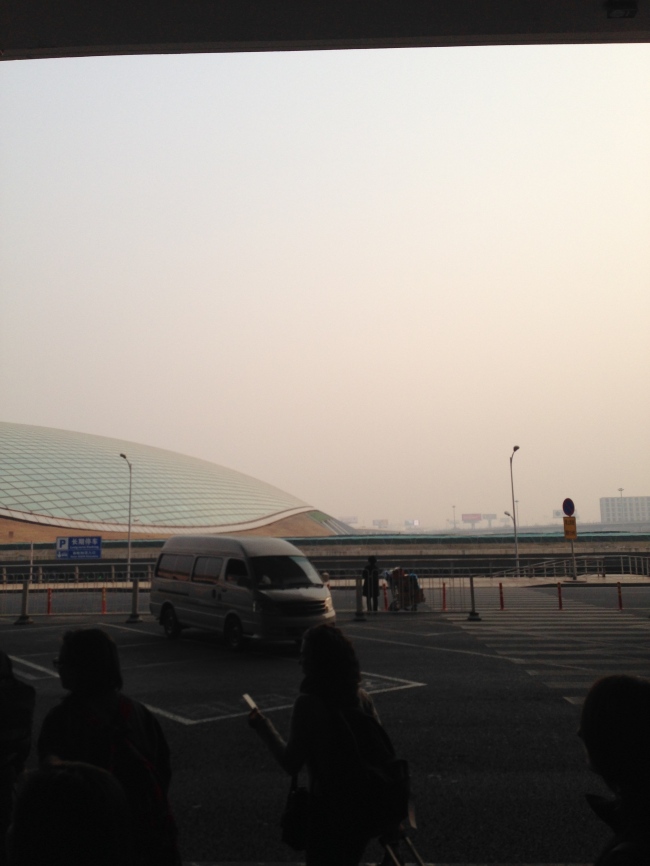 Here’s a picture of the alley our hostel was located in. We were certainly immersed in a local neighborhood while at the hostel. 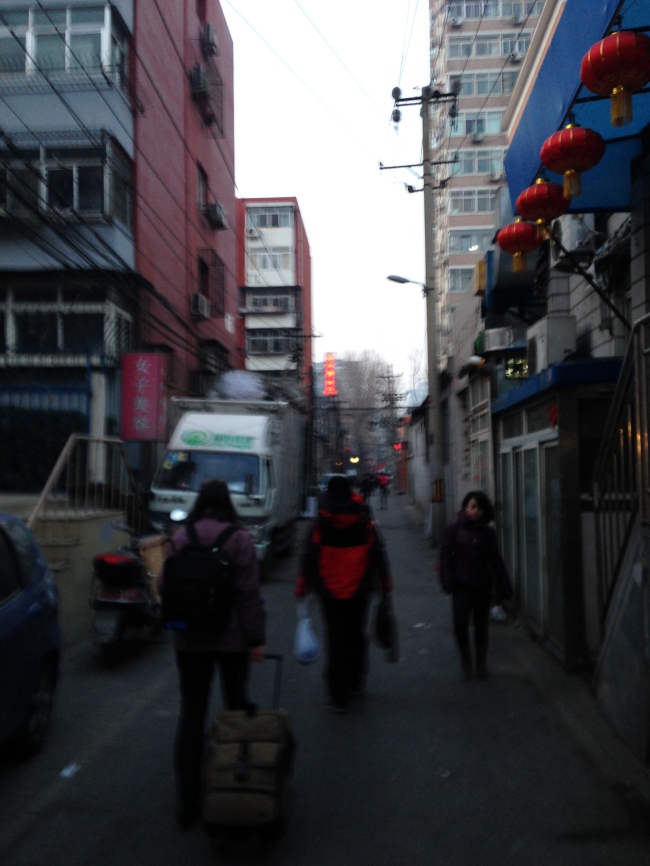 The hostel consisted of a courtyard surrounded by two floors of rooms on all sides. The rooms were fairly big and had everything we needed since we weren’t going to be in them a lot. My first impressions of Beijing were that it was very smoggy, which caused a lack of color in everything. The smog made it very difficult to see very far into the distance and even the sun was dulled by it. There was also a distinct smell from the smog which I stopped noticing after being immersed in it for about a day.

Our first full day in Beijing, we went to the Forbidden City. We walked through while stopping at every courtyard to have the history explained to us by Jack. 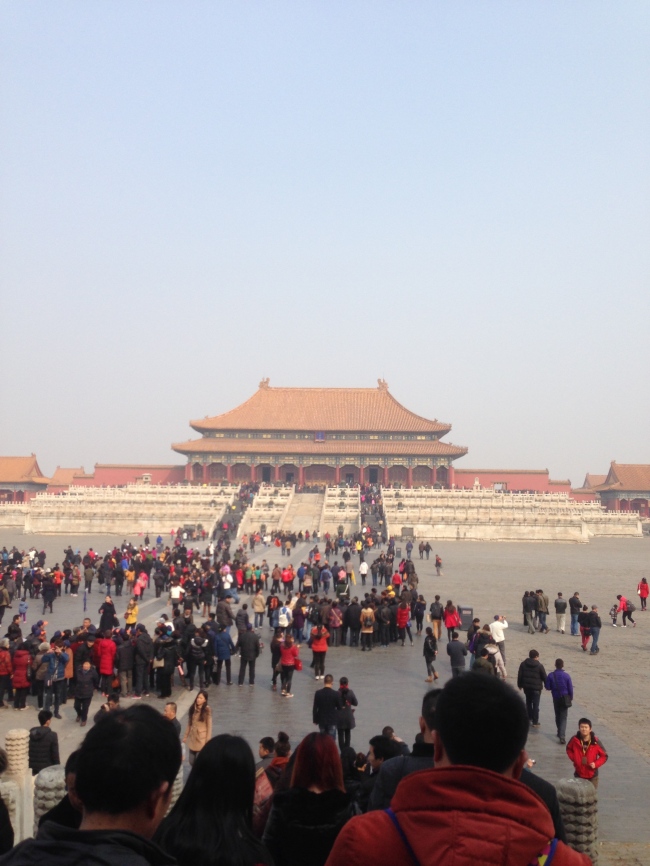 The city consisted of many sections like the one above with massive courtyards surrounded by traditional Chinese structures with statues and walls everywhere. The man at the bottom right of the picture in the red jacket facing the camera is our guide Jack. You can also notice the grey color of the sky which remained consistent throughout our time in Beijing. 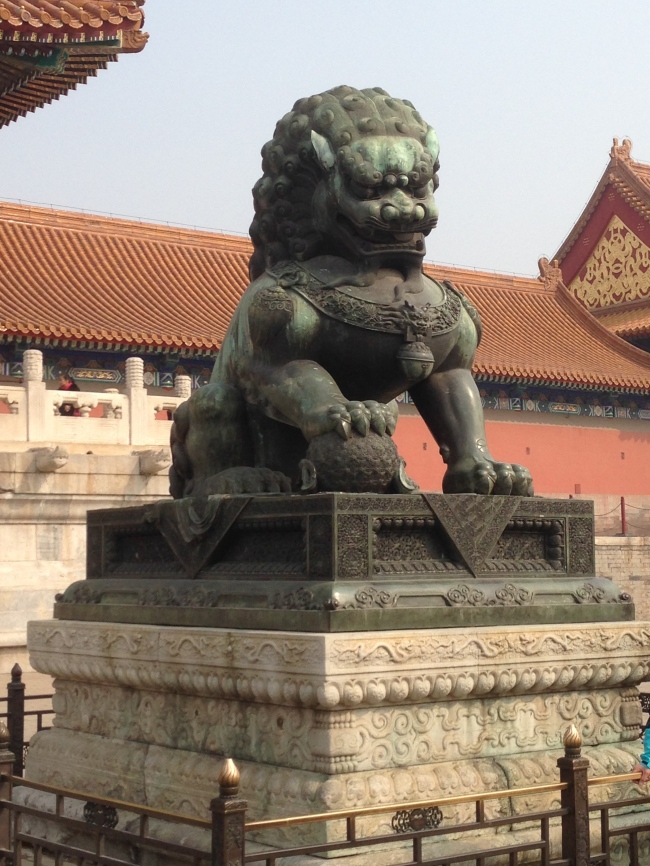 There were many old statues around the city like this bronze lion, which was protecting the entrance to one of the emperor’s chambers. 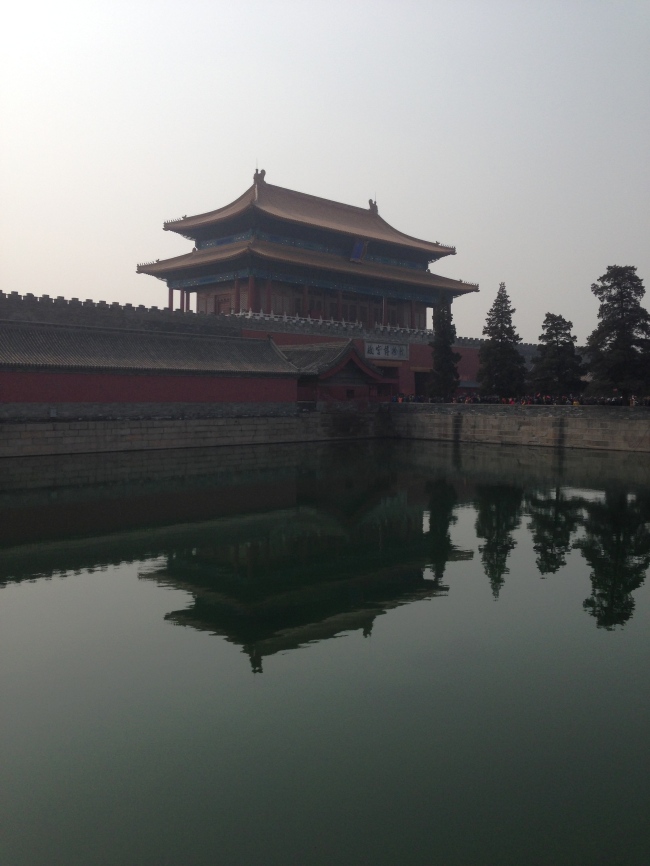 View of the back entrance of the city. The entire thing was surrounded on three sides by a moat.

After the city, we took rickshaws to have a traditional lunch in someone’s home. After lunch we took the rickshaws back and got to climb a very steep staircase to the top of a drum tower which stood overlooking the city. After the tower, we visited “The Hutong” to do a scavenger hunt around a section of the city. Hutong’s are what the locals call narrow alley’s which are off of the main road with tons of shops and homes. The scavenger hunt took us throughout many of the Hutong’s which diverged off of the main road. We were also able to use our Chinese skills to get some questions answered for us by locals. After the Hutongs, we had dinner and got to shop in an upscale shopping district with many department stores. I was already feeling fairly immersed after this first day because of the Chinese we were able to speak with the locals and because we had seen the Hutongs in which many citizens live.

On our second day, we got a tour around a local high school. This was the same school that sent about fifteen students to Westtown earlier in the year so we were able to see those students again and see their version of a high school. Their school had very good athletic facilities for swimming and volleyball which are two popular sports in China. The classes were about the same size as they are at Westtown but they seemed more specialized than our classes at Westtown. One of the classes we visited was a digital animation course and the other was a robotics course, both of which seemed very interesting and the students were all very focused on their work. After the school, we went to the 798 art district which was a section of the city dedicated to allowing local artists to express themselves which is a very revolutionary thing for a formerly very strict communist country like China.

Our third day was one we had all circled on our schedules because it was the day we were visiting the Great Wall. After hearing Jack tell stories and folk tales about the wall during our drive, we were all very excited to take on the climb to the top. There were around one thousand steps at the top but it was worth every one for the views and experience of being on one of the wonders of the world. 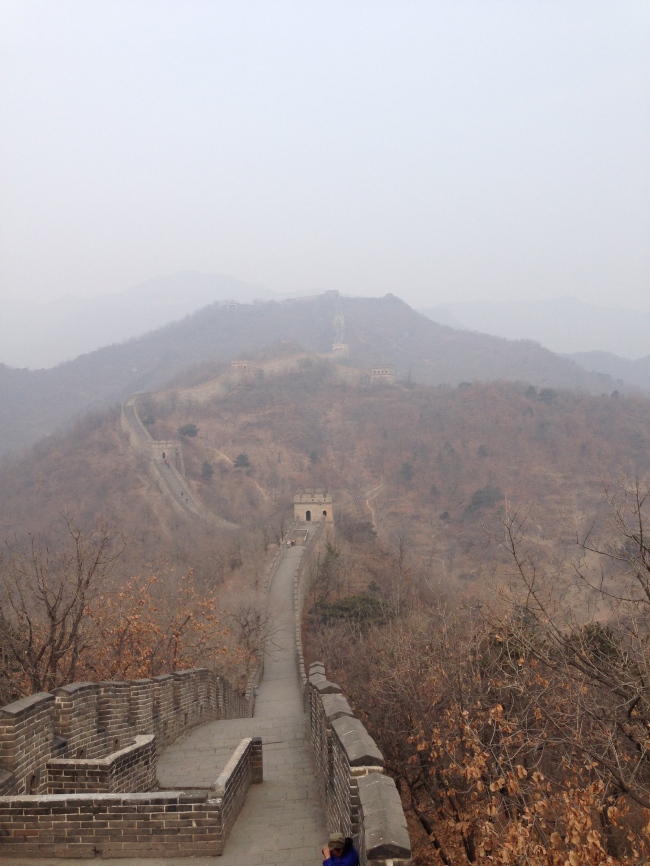 In the picture below, you can see one of the many local merchants who would yell things like “Coke! Gatorade! Beer! Chips! Anything you want!!” every time you walked by them. We quickly learned that if we told them “I don’t want anything” in Chinese, they would immediately stop so ” Wo bu yao” quickly became the most used phrase by us. 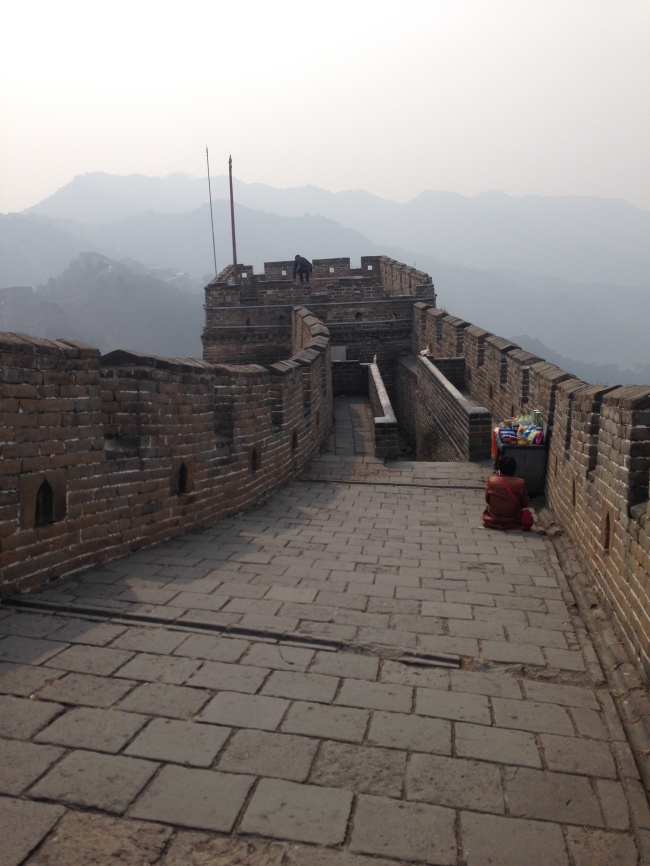 After we walked along the wall, we took a bobsled down to the bottom which was very scary and fun. At the bottom of the wall, there was a whole street of merchants. All of them were selling almost the same exact things, the trick was to find the merchants who were the biggest pushovers when you bargained so that you could get the best prices for whatever you wanted to buy. 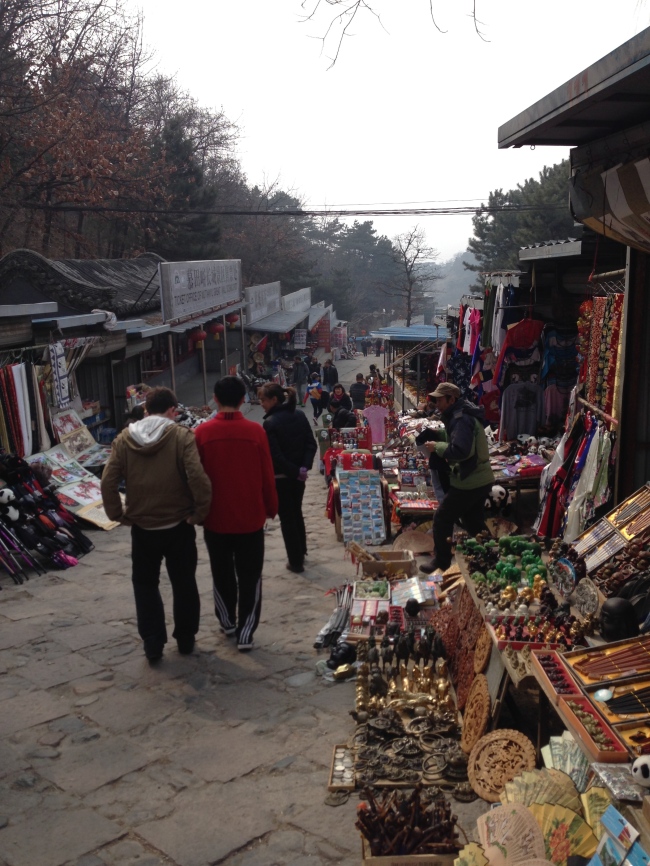 After making it through the merchants and a quick lunch, we went to the Olympic Park. We weren’t allowed to go in any of the stadiums but it was cool to see the iconic “Bird’s Nest” and other sites of the 2008 Olympic Games. There was a very interesting contrast between one of the most amazing architectural feats of ancient China and one of its most recent architectural masterpieces. 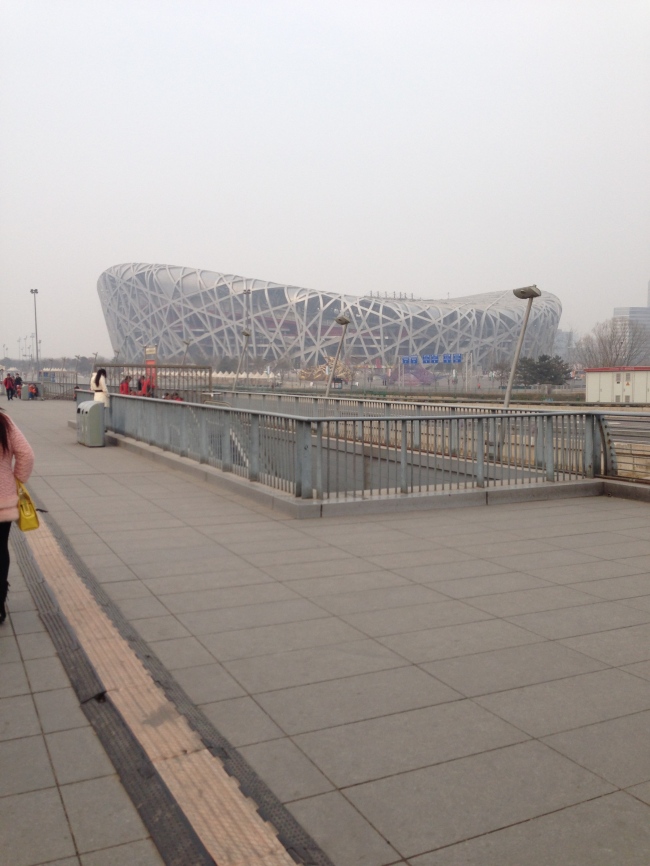 After visiting the Olympic park we went to dinner at a Muslim restaurant near our hostel. The food there was very different from anything we were used to and people in our group seemed to either love it or hate it. By this time in the trip, we all had mostly gotten over the thirteen hour difference between Beijing time and the time at home and we were able to stay up and reflect on what we felt about China after our first few days there. We noticed that this city was very spread out and not a lot like cities here. It was all urban but big sky scrapers were very scattered around. Buildings were also very bland with not a lot of decorations or colors other than shop signs. We also noticed that with the exception of the shopping area and the area surrounding the Olympic village, the buildings didn’t look very modern. They had an old, worn down look to them which wasn’t very aesthetically pleasing. The cars in the city, though, were all relatively nice and were pretty much the same as home. The only major difference was that there were  few foreign car companies in China. We also noticed that it was socially normal and acceptable to spit anywhere and throw trash out onto the street. This made the cities look quite dirty when added to the bland buildings and constantly grey sky. This didn’t take away from the very interesting things we experienced and saw while in the city, it really only served as a reminder of the differences in society between Bejing and West Chester, PA.

Until next time 再见，