Today was Teacher Paula’s birthday! We woke up a bit later than usual at 7:30 am and Teacher Alan leaded us in singing happy birthday outside of Teacher Paula’s window to wake her up.

Afterwards, we went about our daily chores and got ready for breakfast. On top of getting ready for breakfast, Sam prepared some wonderful Banana bread inside the solar oven for T. Paula’s birthday. I’m very excited to eat some of that later tonight.

For breakfast, Mekhi made most of the very delicious pancakes, which we had with either honey or store bought “maple syrup”. Along with the pancakes we had the usual yogurt with fruit and granola. After clearing up our breakfast meal, we devoted the earlier half of the day to learning more about the Grey Water system which, in short, filters the grease from the water so that the water we use in the house can be recycled for the plants and local vegetation. First, we added more rocks to the one that was just built down by the tiny house. Then, we left the sinks on in the tiny house so that the Grey Water system would fill up with water. While waiting, we hiked down to the creek where we crossed the bamboo bridge that was built in 2005 by the senior project that came. 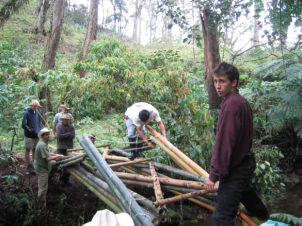 Down by the creek we discovered a pump that was bringing the water from the creek up to the house we were living in. The pump operated by using the power of a water wheel which powered two pistons, which pumped the water up the mountain to a very large water container which we also hiked up to. 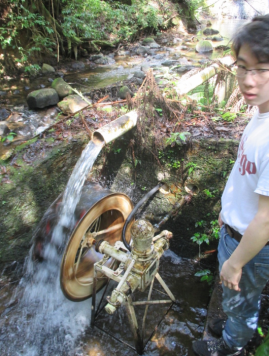 At that point, the water traveled through pipes down to the house. After learning about how we were getting our water, we looked at the Grey Water system already in place up at the larger house. Not only did we get to see what a complete system looked like, but we also got to harvest some water lilies from the older system to bring down and plant in the newer system. The water lilies are placed in each tank to filter the soap and grease from the water that we use in the house.

After learning about the Grey Water system, we came back up to the house and had lunch. For lunch we had delicious spaghetti, which put us all to sleep for a quick nap. After the nap, we set out on a hike to the original cloud forest, which was about 30 minutes away. About 10 minutes into the hike, we encountered Vigo, a neighborhood dog who then followed us on the entire hike and back. We enjoyed his company very much.

When we got to the original cloud forest, it was amazing to see almost untouched wildlife. We crossed swaying bridges and several of us slipped multiple times. The hike was great, as we took in the beautiful surroundings in the company of good friends. 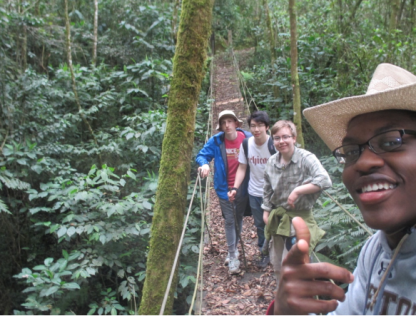 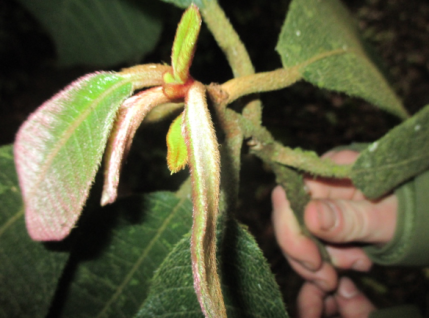 Once we hiked through the cloud forest and hit the road, we turned back around and returned back home. Now as I am writing this, I can’t wait to eat the delicious dinner and sleep like a baby until tomorrow morning.