March is a confusing month in Iceland, just between winter and spring, resulting in storms that are a mixture of rain and snow. However, my first night in Iceland was rather cold and the skies were clear, which was a perfect opportunity to go searching for the Northern Lights. So, in a packed car with Dagny and her friends, I saw the Northern Lights atop a mountain. Any light pollution makes the lights undetectable, but in the pitch blackness of the mountain, I was able to see the faint green wisps dancing in the air. Listening to Icelandic music, I stared at the sky in awe. These phenomenal lights are so common to natives, that Dagny and her friends were caught off guard at my sheer amazement. Unfortunately, neither my Fuji-film nor my iPhone6 were able to capture the lights, but I do not need a picture to remember that night.

The next day,  I went to see an inactive volcano pictured below.

The water pooling at the bottom of the volcano had become frozen, a rather rare occurrence. On our dredge down to the the frozen crater, we met a couple from Harrisburg, PA. Immediately after I said “Hello,” the man responded by saying, “You must be from Philadelphia.” I was utterly confused that I had such a detectible Philly accent, I eventually realized that I was wearing a Phillies hat…

Afterwards, we were back on the road to complete part of the “Golden Circle,” a tourist route in the southern part of Iceland. The first part was to see the active geyser, Strokkur. To my surprise and Dagny’s, the area was packed with tourists. Dagny said at this time three years ago, barely anyone knew about this hidden secret. Behind fishing, tourism is the most important part of Iceland’s economy. It has become very clear to natives that more tourists visit the country every year.

The land was filled with natural hot springs and geysers. The sulfur in the air smelled of boiled egg. Some of the geysers, like the one shown below, are so hot that they are literally boiling.

Strokkur explodes about every ten minutes. The highest the water reaches is approximately 30 meters.

To continue the “Golden Circle,” we drove to see the most powerful waterfall in Europe,  Gullfoss. In the summer, Gullfoss can notoriously be found with a rainbow above it. However, the winter view of Gullfoss was not shy of any beauty.

Here is Dagny and I (in my Phillies hat) in front of Gullfoss Falls. 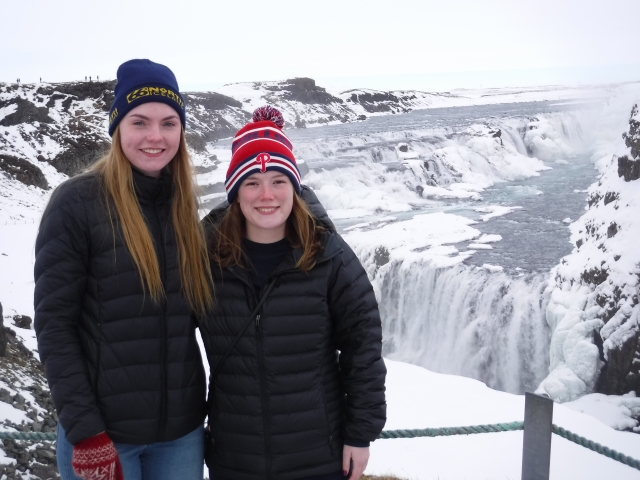 On the drive home, we stopped randomly to see some of the horses that can be found throughout the fields of Iceland. When we pulled up to the gate, the horses literally stared right at us. Then two of the horses proceeded to walk right up to the gate and let us pet them. I almost laughed when I saw the horses because the animals are so short, they resemble more of a donkey. Dagny is about 6’2″ and you can clearly see the height difference between the two.

Icelandic horses also have fur in the winter that is soft and fuzzy to the touch. Eventually, the horses shed this fur when the weather becomes warmer. Sometimes their undercoats are a completely different color from their fur. Quite an interesting animal…

Tomorrow I will be blogging about my day spent at the Stora Mynd Conference in Reykjavik!