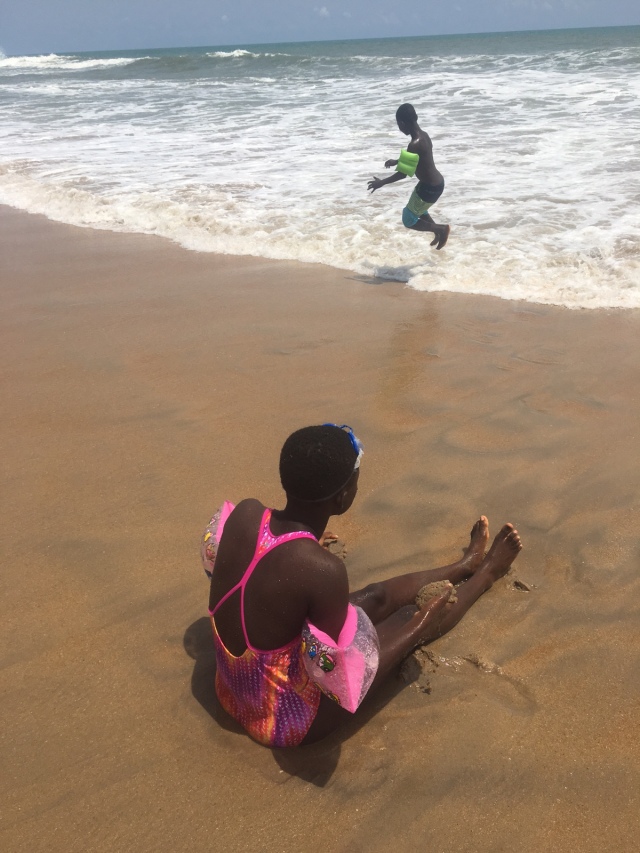 It felt like we spent longer at the resort than we did the previous time there. It was extra special too because Victoria, Isaac, and Dorthy (the children who we are living with) came with us! I think they’re the funniest children I’ve ever met, and despite not being able to swim, they kept up with the best of us in their pink and lime green floaties. Isaac even decided he was a strong enough swimmer to hit the waves which caused a little bit of anxiety with the adults. There was a nasty undercurrent, hidden rocks and waves bigger than any of us. Despite all that, it was beautiful and the water was quite warm (though the pool was my preference).

In the late afternoon Isaac, Hamilton, Mercedes, Katie and I decided to take an excursion to the crocodile pond located (surprisingly) directly behind the parking lot. Though the enclosure was set into the ground with a wall surrounding it, the wall wasn’t tall enough to keep you from falling (or climbing in). The crocodiles appeared to be sleeping when we got there and, as you can imagine, Isaac really just wanted to see them move. He found a really big stick on the ground and was banging it on the side of the enclosure all while making the deep reptilian sound in the back of his throat. Though I was thoroughly impressed, the crocodiles didn’t seem to notice and kept on sleeping. Despite the sign clearly reading “No throwing rocks at the crocodiles,” Isaac realllllly wanted to throw his stick at them just to get them to move. I burst out laughing because I was thinking the same thing about wanting the crocodiles to move. However, we set a good Quakerly example for Isaac by telling him no, he could not throw a stick at the crocodiles. They were living creatures just like us and deserved to be respected. If you wouldn’t want to be woken up by someone throwing a stick at you, then the crocodiles wouldn’t either (and after all, the walls of the enclosure just weren’t that great).

PS Oh, and at the resort we got virgin piña coladas.