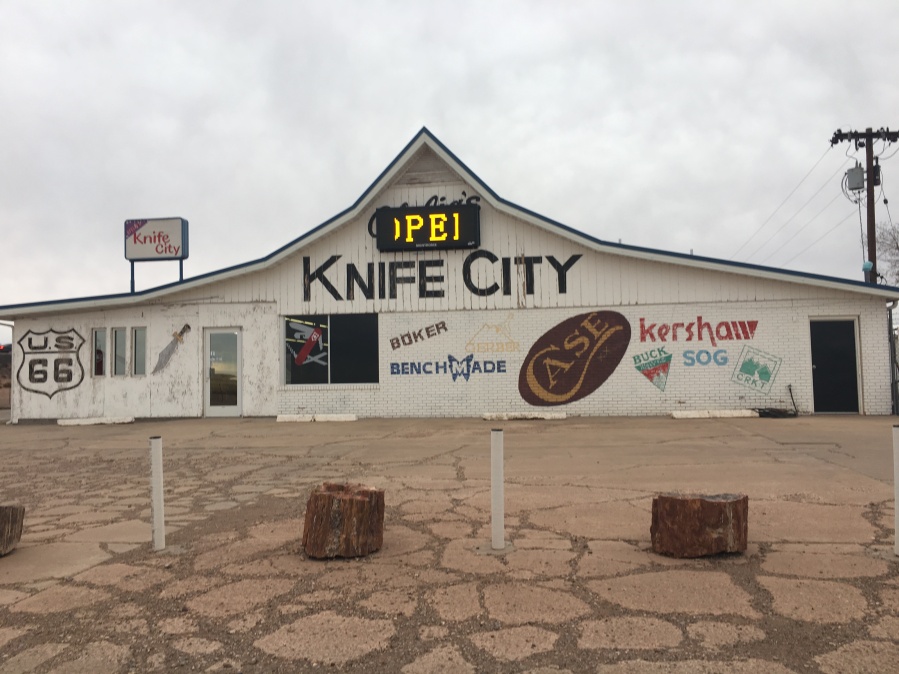 We started our day off by returning to Fort Apache and finishing up the work we started on the Etsy shop yesterday. However, by 11:30, we were on the road again, heading to Gallup, New Mexico. Although it was mostly a travel day, we did see some interesting sights, especially the ghost towns along Route 66. This route, which stretched from Chicago to Santa Monica,  flourished when it served as a major path for westward travel and migration. However, beginning in the 1950s, it fell into decline after being replaced by the Interstate Highway System. Today, the communities which were once made affluent by the heavy traffic along Route 66 have either fallen into disarray or been abandoned completely. 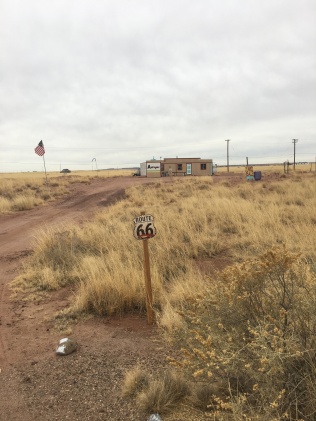 Driving through Holbrook, AZ and the surrounding area today, it was so strange to see the decrepit buildings set against the backdrop of one of the most incredible landscapes I have ever encountered. The grassy fields stretched far beyond the remnants of human life, turning into mountains and cliffs, silhouetted against a purple evening sky. My experiences on this trip so far have shown me that the earth itself contains so much spiritual power. Even in the environment of immediate dreariness which we drove through today, I recognized that it paled in comparison to the immense beauty just beyond. However, there were indications that the power of the land was often forgotten in this area. This was shown most clearly by the several large, hand painted “land for sale” signs we saw standing in open fields. At first, I didn’t give much thought to the signs beyond the fact that I had never seen land advertised so explicitly and casually. However, Ed seemed moved by the sign and stopped to photograph it. This prompted me to think more deeply about the meaning of the sign in relation to the work we have been doing on this trip. Soon enough I realized just how wrong it is to be selling land for profit. To begin with, this is not our land to sell, as it was stolen from the native people who have lived here for thousands of years. Furthermore, I have been learning and experiencing the spiritual value that the land holds in the eyes of native people. To them, and in a variety of spiritual traditions, the land is sacred and should be revered for sustaining our lives. Therefore, at least according to my own interpretation of native spirituality, it is not something that can be possessed by one person, but rather all the land is home to all humans. It is not meant to be bought or sold, but honored and cared for. This is easy to forget in the fast-paced, materialistic, profit-driven society we live in – a lifestyle embodied by Route 66. However, now that the money has gone away, nature has begun to reclaim the terrain, restoring the beauty and spiritual power of the landscape. 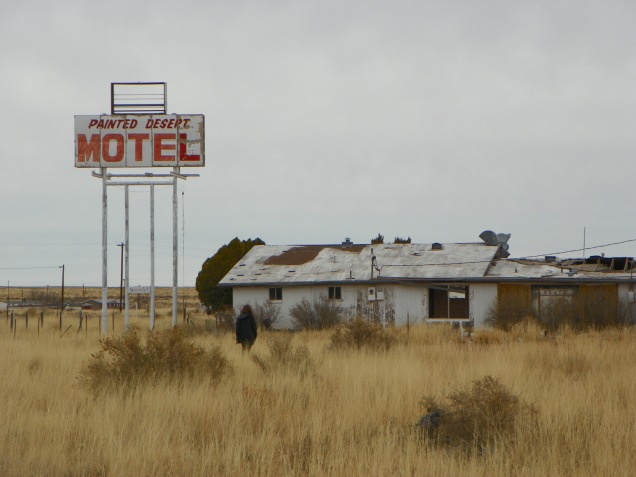 In our travels between reservations, it could feel like there was nothing around us – only our car and the highway. Just when the road seemed too long and we began wondering whether we’d ever see civilization again, another car came sputtering down the road, or we’d find a gas station or abandoned motel. These often vacant rest stops were found on the historic Route 66, parallel to the main highway, I-40. Each miniature stop had a separate theme, whether it’d be the petrified forest gift shop or, as we saw today, Knife City, a town named for its tourist knife shop. Each sign was a weather-worn relic from the 1920s – 1960s, painted onto the billboard or building itself when Route 66 was still a highly-frequented road and major tourist destination. A particularly large and rusty town we encountered was Holbrook, AZ, where most of our photos were taken. Continuing with the theme, many stores there perpetuated the cultural appropriation of Native people, despite the fact that a quarter of Holbrook is Native. It’s easy to write off these appropriative stores as outdated and artefacts of history preserved in abandoned towns, but that does not take into account why these Native gift shops are still open today. In addition to this disgusting appropriation, each town was filled with enormous, tacky, and wonderful dinosaur replicas, meant to honor the expansive dino fossils found in Arizona. Walking through the towns felt like entering an abandoned theme park whose imagery suggested that Native people and dinosaurs roamed the area at the same time.

At one photo stop, we encountered a supposedly abandoned motel, whose open doors and mattresses on the floor told a different story. Even in this vast expanse of nothingness, there are people everywhere. People live in these abandoned buildings. People shop at Native appropriation gift shops. People work at dinosaur gift shops 40 miles from all surrounding homes or communities. People live in these preserved towns of a past America. 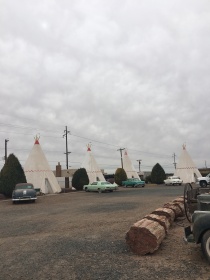 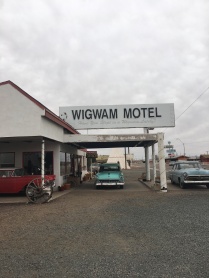 As we made our way from White Mountain Apache through Holbrook towards Gallup, we saw an odd mixture of beautiful and rugged landscapes that called us to explore and document them through photos. However, these impactful scenes and moments were mixed with more images that continue to perpetuate the romanticization and commercialization of natives. We stopped at the Wigwam Hotel in order to take photos. The Wigwam Hotel rooms were each individual tipis (photographed below) surrounded by old cars in the parking lot. At first, my attention went to straight to the vintage cars, and then to Maggie’s obsession over the the replica of Mater from the movie Cars, but afterwards I took a closer look at where I was. The Wigwam Hotel’s name implies that they use the traditional image of a dome home structure known as the wigwam or wikiup. The Wigwam Hotel used the typical image that is often seen in most displays of Native culture, the tipi. Tipis were not used in this part of the country but rather in the great plains and parts of Canada. It would be more accurate to use wigwams since this type of dwelling is used in this particular region. The hotel is using a traditional place of dwelling as a tourist destination. Its main attraction is the exotic experience of living as the natives did, which perpetuates the idea of us versus them. It is businesses like the Indian stores and the Wigwam Hotel that commercialize and romanticize Native Americans that are causing these negative stereotypes to impact perceptions of the modern native. As I was leaving the White Mountain Apache reservation, nothing was more apparent to me than that the modern native narrative is complex, diverse, and cannot be summed up by a tipi or a derogatory image. The modern native narrative is a product of history, past and present.