So the last four days have been quite crazy to say the very least. Monday was a day starting to do prep work for what was to come on later in the week. Going into the later half of the week there was multiple events going on later in the week.  After Monday’s prep we went into service not knowing what to expect the crowd would be like. It just so happened that it was quiet, and we were able to leave early. However, Chef Tio told us that the next morning we would be leaving in the morning when she does and follower her for the whole day. This meant not sleeping which I was able to do for the past few days. The day included going to the gym,breakfast, food shopping,and beginning to prep for a catering event for Wednesday. The cool part about Tuesday was that Chef Tio had a speaking event at Sprint’s headquarters which are just over the state line in Kansas. She along with two other successful women from the Kansas City area to talk about empowering women in the workforce. This was ahead of  International Women’s Day which was on Thursday. It was amazing to hear her talk about her experiences as a women chef in a male heavy profession. This was because she showed all of the power and tenacity needed to get to where she is today. That event took up most of the night. 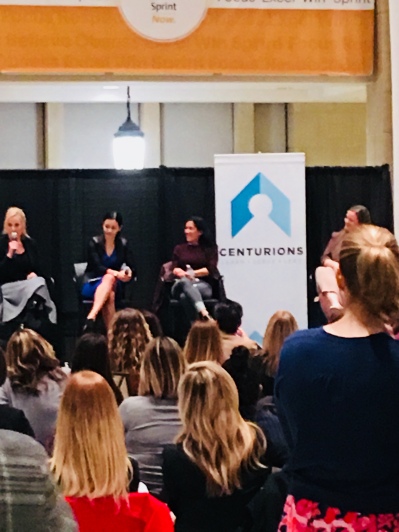 – Chef Tio speaking at an event at Sprints Headquarters.

Wednesday was the start of a long day in general. Today there were two major things going on. First a catering event for a company of a hundred people that could potentially become a long term catering contract with them, and the Big 12 men’s basketball tournament. To get ready for this catering event, we had to take all of the prep work that we did over the past two days and bring it all together. For example, I made the fried polenta which was the starch of choice for the menu.  The day before I had made five batches of polenta. Let me tell you, polenta is easy to make but is painful on the arms. If you don’t keep stirring the polenta constantly, the cornmeal could burn easily ruining the whole dish. At one point both of my arms were at work because I was doing two batches at a time. Once it was made, it had to refrigerate so I could fry it the next day. I asked chef what should fried polenta look like? She responded with GBD. I had no clue what this meant so I had to ask her. She replied, “Its my favorite phrase –  Golden, Brown, and Delicious.” So once everything was GBD, we headed out to the catering site. It was a complete hit and everyone loved the food that we were able to make for them. It was even better to know that Chef was offered the catering contract and that I could be part of helping make that happen. As soon as we had finished that job we dashed back to the Belfry to get ready for dinner shift. Since we knew that the basketball was going to bring a large crowd in we had no clue what to expect once again. Luckily business was steady and overall a good night. I even got to watch Westtown alum Mo Bamba in the tournament representing Texas ( even though he was hurt).  Fast forward to today. Again my day began quite early, and we were off to prep desserts for the restaurant. After we were done with that, Chef gave us a noble and difficult task. This was to go and take inventory of all the unused cooking equipment in the basement. After some trials and tribulations, however, it was accomplished quickly. Not much happened after that until late this afternoon. Kansas was playing Oklahoma State. If Kansas won we knew we would be packed, so it was all hands on deck. Halfway into prep before we opened I sliced my thumb open while cutting charcuterie. Luckily it wasn’t major and a band-aid and some gloves did the trick and I was back to work. Once we opened and knew that Kansas did win, that the crowds were coming. While working in the kitchen tonight, I think I saw twenty burger orders come through the machine in about ten minutes. Once it died down however, Chef was invited to a local restaurant opening and we were able to tag along. It was amazing to see what an opening party was like, and to sample some of the thing that a restaurant would have on their menu before it even opened. Well friends, this is now where I leave you until the next post. Until next time!