Friday began quite early again due to us getting home early from a restaurant  opening that I talked about in the previous blog. So the plan was to get up and work out early after dropping chef’s daughter off at school.  The only real reason that I went was to swim at the gym that I thought we were going to. Instead we went and made some desserts for the restaurant. Yiheng made a flour-less chocolate cake that is matched with a round piece of chocolate Ganache. Once that was done we had a quick breakfast across the street, and went on a shopping trip.  We went to visit the local Cutlery store called Ambrosi Bothers. They service almost all of the chef’s knives in the entire city of Kansas City. It was amazing to see all of the different gadgets, and knives to use in the kitchen. I already have a few chef’s knives but I did purchase a new slicing knife. This will aid me when I need to cut prepared meats and other cooked objects. After this fun, we began running our errands for the day. This included dropping off  catering supplies to the company that we made lunch for that past Wednesday, and making a run to the apple store. Once that Happened we went back to the restaurant to start our prep for service. It was quite busy that evening due to the large college basketball tournament taking place down the street. At one point during the night we had hit a rush where we sold 20 burgers in about 15 minutes.  There was also an group that came into the restaurant for a special dinner where nothing was ordered off the menu. One of the starters that we made was salmon tartar.  This was a lot of fun to make because it allowed me to learn the proper way to filet a fish. Chef Tio made it look so easy.  Once we filet the salmon she took a small piece of the fish and chopped it up very fine and adding all of these amazing ingredients to it, like an artist adding layers upon layers of color to their work. She also knew that I had never ate raw fish before. So pictured below was the first raw fish I have ever ate before in my entire life. 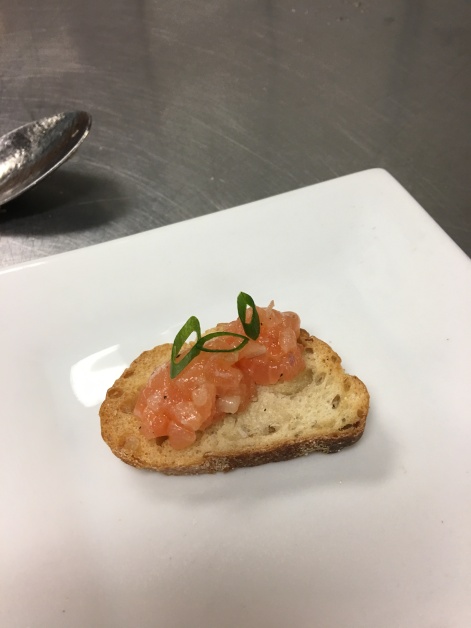 Below is one of the other menu items that we made for the group which was pan seared scallops with blanched potatoes that were then pan fried, with homemade chorizo, and pickled red onions. 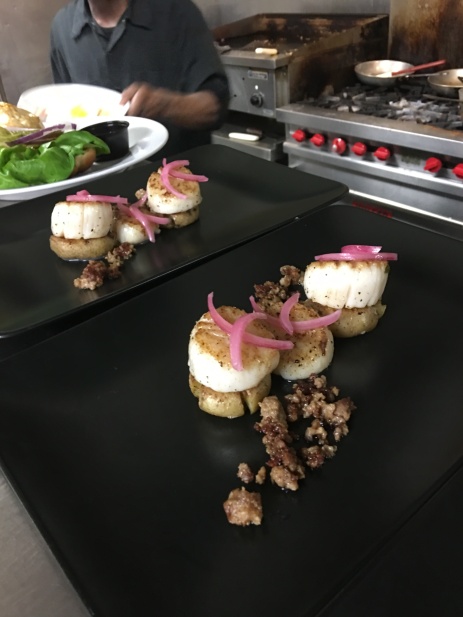 Shortly after this dinner was done we made our dinner, and headed home for some well needed rest.  The next day would also be my last day at the restaurant. Unlike most days we slept in pretty late and enjoyed it very much. This was a major day for getting prep work done for the next week of the three month catering contract that Chef had just received.  Once all of the shopping was done Chef took us to a really cook place for lunch in which she called ” fun Chinese food.” This place was called Blue Koi and it had some great dumplings, and roasted duck. We all got hit with all of the dreaded food coma and we all went back to the house and took naps. We all got up and rushed over to the restaurant to begin prep work. I chopped lots of squash, and eggplant for Monday’s vegetable dish for the catering event. Since we had all of these vegetables around Yiheng wanted to make what is really called vegetable byaldi, but is better know from a famous Disney movie which is called Ratatouille.  Here is one of the ones that we made before it went into the oven compared to the one from the movie 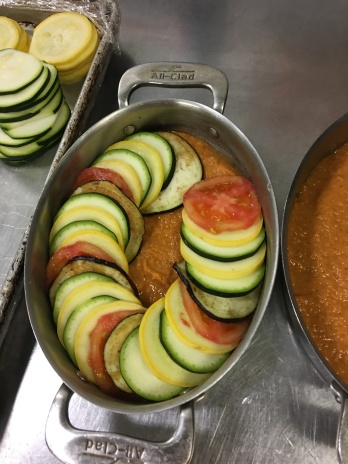 So with that we also made a few other dishes for fun with some of the salmon and potatoes from the night before. It was great to see all of our minds come together to see make some amazing food. For dinner that night I made a pan roasted salmon with a maple bourbon glaze and the same potatoes as the scallop dish the night before. It was such a hit that I didn’t get a picture of it.  So to wrap up my time at the restaurant I took pictures with some of the people I worked with. In the first picture is Keith who ran the grill in the kitchen. In the second picture are Daniel, and Jake, who are probably the funniest and most enjoyable bartenders I’ve ever met. 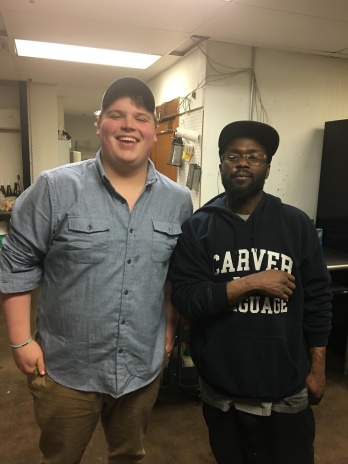 Finally here are some of the pictures of the restaurant and kitchen. 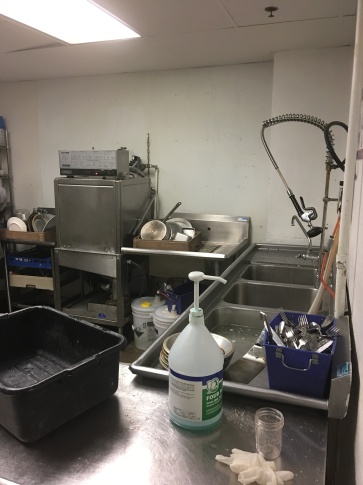 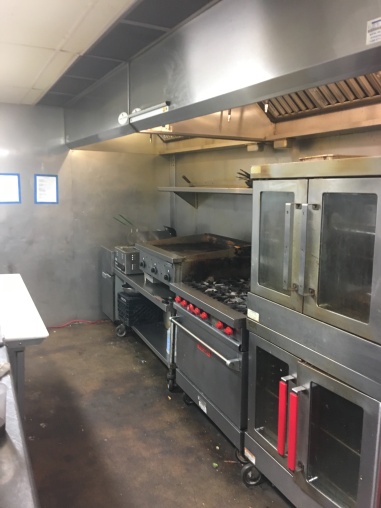 The Kitchen: Small but Mighty 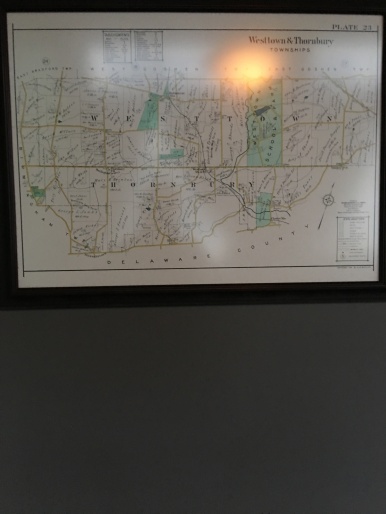 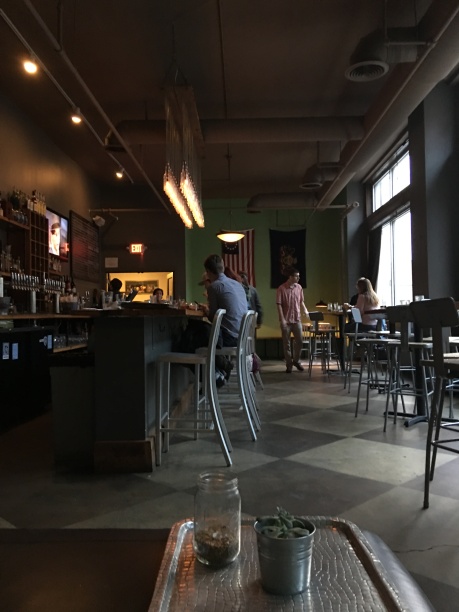 The restaurant from the view of a comfy couch as I rest my feet briefly.

Sunday was a nice day to end my adventure out in Kansas City. After Sleeping in and packing we went to a donut shop for breakfast and then went around town on a street car, and took a few final pictures before I got to the airport.

The First picture below is me standing exactly in both Kansas and Missouri at the same time. 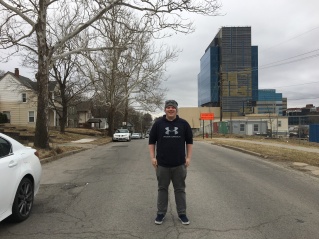 And the final picture taken of course was with Chef herself at the belfry before she took me to the airport so I could catch my flight home. 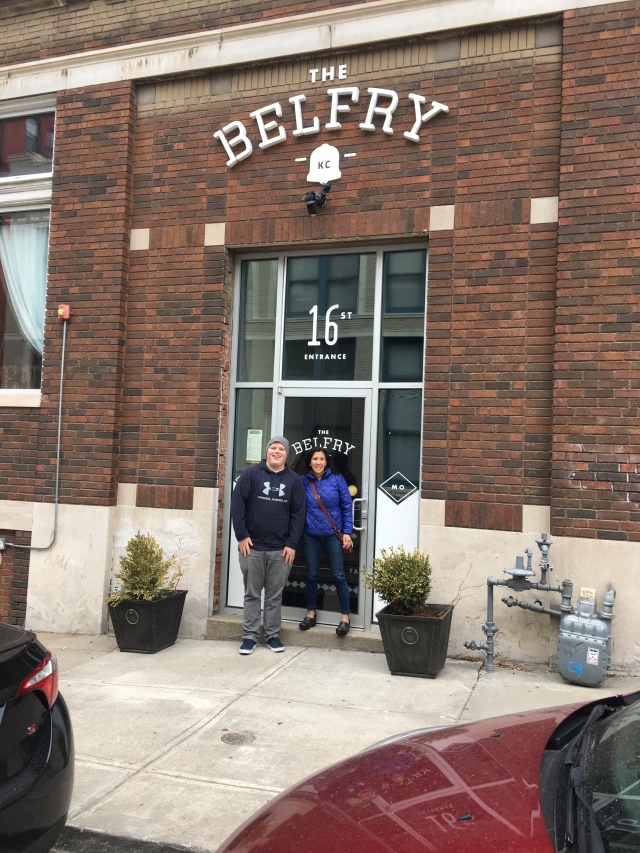 Thank you for reading the blog, and I will be writing a shorter blog in a few days with a reflection of my time out with Chef Tio.  Until next time!