I apologize for not writing, the boat we are staying on had broken Wifi for the first few days. We have done so much in our first few days of being here, so much that it would be hellish to read a massive paragraph about it. So, that being said, I will do a more pictorial approach to this choosing my favorite photograph that I have taken from each excursion we went on.

We arrived one hour late to the Galapagos, so the afternoon felt pretty rushed. When we arrived to North Seymore Island  however, time slowed down as we entered these animals’ habitat. Other animals we saw on this island included blue footed boobies, male/female frigate birds, land iguanas, and of course sea lions.

The next morning we left the ship at 7 a.m. for a coastline tour of Isabela Island. On this trip we saw the landscape of the cliffs of Isabela Island, clearly defined layers in the rock where you can see the land formation. Other than that there were sally-lightfoot crabs, marine iguanas, Galapagos penguins, sea turtles, and the swallowed tail gull pictured above. 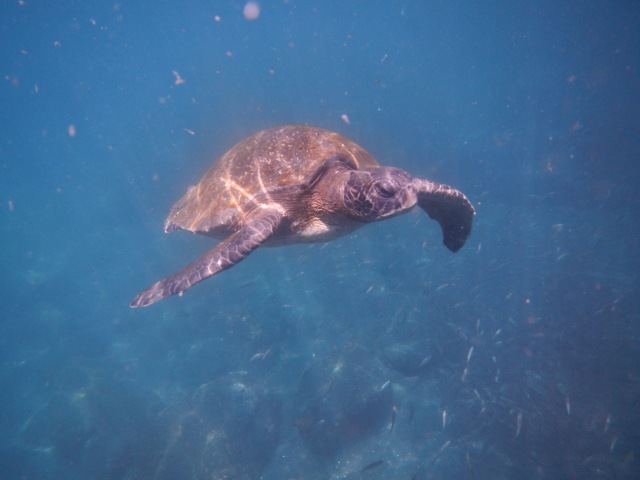 We have been snorkeling everyday so far. I have been taking a lot of videos with the GoPro, but my dad captured this image of the sea turtle.

On the island of Isabela, in the afternoon we took a tour of the Island shore where we hiked along lava rock and dodged what had to be thousands of marine iguanas (one of which is pictured below taking a swim). On that island we saw lots of flightless cormorants, more blue-footed boobies, sea lions, sea turtles, and more species of crabs I was unable to identify. We were also able to get the rare experience of seeing a marine iguana hatchling in the wild.

The next day, we were on the island Fernandina where we were able to see the Giant Tortoise in the wild. The big guy pictured above was one we encountered on the trail. There weren’t many other species other than the Galapagos carpenter bee.

Yesterday, we were on the red sands of Rabida Island. We saw mockingbirds, cactus finch, medium brown finches, land iguanas, marine iguanas, oyster catchers, flycatcher birds, and the Galapagos dove (pictured above). In the afternoon my dad and I swam with some white tip reef sharks, manta rays, eagle rays, and lots of parrot fish.

Galapagos has been fantastic so far, and hopefully the internet on our boat will be fixed so I can share more pictures for the rest of our time here!