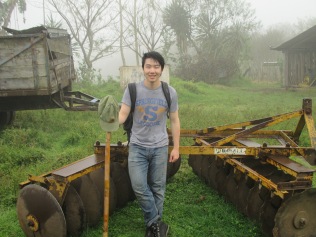 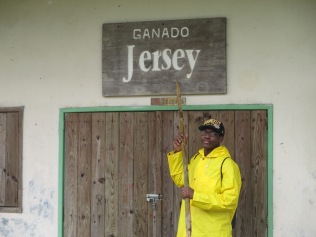 This morning was like any other regular morning. We tried to get up at around 7:00 am but we ended up waking at around 7:15 am and started our daily yoga routines at 7:30 ish. Sam directed the most powerful and influential yoga routine this morning; he would like to dedicate his efforts to his madre, as he is telling me to “shout out Betsy Pinsky”.

After yoga, we got around to our daily jobs. When I went down to the mushroom area, I saw the aftermath of the wind storm the previous day. The tarp that covered the entire area had fallen and it made it difficult to do my job. After our morning jobs, we had another delicious breakfast of the usual Mexican style eggs and some homemade yogurt that T. Alan made the night before.

After we ate our breakfast, we went on a hike through the original cloud forest. However, this time, our destination was the dairy which was around 10 minutes past the cloud forest. At the dairy, we took many pictures and looked at the grazing cows. We even met a kind black dog that reminded us of Vigo. On the walk back, we took a different route that made it easier on our legs. We got back to the big house an hour earlier than planned so we rested and took naps before lunch.

For lunch, we had delicious vegetable lasagna highlighted with some delicious juice. And although we had all rested up before lunch, we had another short resting period after lunch as usual.

After lunch, Angel called for our help in fixing up the wreckage of yesterday’s storm. We walked down to the mushroom area and fixed the tarp that had collapsed. Afterwards, we accompanied him on a short walk up to the cistern and helped get rid of a pesky fern that was bad for the surrounding vegetation. In preparation for the Mexican students coming to learn about eco-technologies in the near future, we also learned further in depth about the electricity being used in the big house.

Yesterday, we had planned to help Dani and Yolanda out with herding the sheep at 5:00 pm, so we headed over to the pasture and herded 30 sheep. But, when we counted the sheep inside the shed after the job was done, there was one baby sheep missing. We went back out into the pasture to look for it and sure enough, the baby sheep was lying in the corner of the pasture. The sheep appeared to be injured as it had trouble walking, and we learned that a dog bit it a few days ago. We carried the injured sheep back to the shed and began walking back to the big house. As we were just walking up the last hill we heard yells from the pasture. It sounded like Dani and Yolanda were in trouble as they yelled for us to come back. We ran uphill, back to the pasture and we were all out of breath when we arrived. As we looked around to see what was the big deal, it appeared that Mekhi and Leif had just forgotten some of their belongings. Pleasantly surprised, we walked back to the big house, excited to eat dinner. Later tonight, we’ll be having a “joke night”. We look forward to continue having fun and making this trip a positive experience.