Overview of Day 1: Our day started in Santa Fe, New Mexico, an hour drive from our hotel in Albuquerque. Santa Fe is the capital of New Mexico and has large influences from both the Native American and Hispanic communities. Its buildings are modeled after the traditional adobe structures. This quintessential southwest look makes Santa Fe visually appealing while the arts and culture make it a key destination for many. Following our visit to Santa Fe, we made our way up through the secluded city, Taos, towards our first experience of Native American life on a reservation called Taos Pueblos. Taos Pueblos is a Native American reservation that has a unique and authentic look with it’s adobe structures. The community, in order to turn profits, charges visitors a small fee to walk around a certain part of the reservation and see these unique houses and get a glimpse into native life. After Taos Pueblos, we made our way down the scenic highway called “turquoise trail” or “the high road.”  This drive, for all three of us, was one of the most beautiful and powerful experiences with the natural world. It was full of history, spirituality, and miracles of nature that amazed us all.

We arrived in Santa Fe this morning at around 10, an hour and a half drive from Albuquerque (where we were staying). As soon as you enter the outskirts of the city, the designs of the houses transition into faux pueblo-style houses, modeled after the traditional adobe buildings of the Pueblo people. The area is populated by many white, wealthy artists and celebrities, looking for a remote escape from stardom. After arriving, we parked (for free!) and walked into the center marketplace, where Native street vendors were selling their handiwork. Dozens of extremely wealthy galleries lined the streets of the small city, while Native vendors, some travelling over five hours to arrive at the market, sold their jewelry and other products on the sidewalk of one block of the center market. There was something unsettling about the jewelers sitting in the cold, eagerly selling their art for $10 to $50, while wealthy gallery owners profited from the white fascination and appropriation of Native culture mere yards away.

Each vendor was willing to share their story with extreme authenticity and an eagerness to connect with us as individuals. Though conversations usually started with a simple, “Where are you from?” (always followed with a mandatory “Go Birds!”), they quickly escalated to life stories and family history. The kindness shown to us, tourists with cameras hanging around our necks, was unlike anything I’ve ever experienced living on the East Coast – though I soon learned it was the norm in this area. The face-to-face contact with people from Hopi, Navajo, Zuni, Santo Domingo, Taos, and many other tribes differentiated the marketplace sales from galleries that sell Native work for thousands of dollars, without recognition of the Native people who made it.

Though Santa Fe’s beauty and personality appealed to us visually, its underlying messages to its Native inhabitants revealed a darker truth. The community’s existence – in terms of profit, style, and population – relies on the exploitation of Native people. This first stop of our day gave critical context for the reservations and missions that would been seen later in the day. 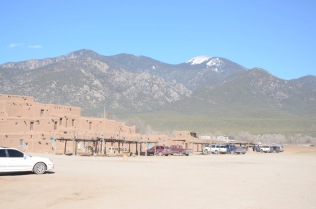 Taos Pueblos is truly a beautiful sight to see. As shown in the photo above, its stacked style of adobe houses is unlike anything you’ve seen before, and they are positioned in beautiful mountains that take your breath away. While a lot of the population lives away from these unique structures in more modern buildings, the traditional adobe pueblos still hold the homes and stores of many natives. The community of Taos Pueblo, in order to generate income, charges a small amount of money to people wanting to visit this unique area. We, like so many other visitors, upon arrival took out our cameras and started shooting. The colourful doors, the unique clay structure, the dusty landscape, and the beautiful mountains all had to be captured on film.

After 10 minutes of photo taking, I took my eye away from the lens to look at what I was so eager to take a photo of. I was suddenly very uncomfortable with every click of the camera. We were taking photos of people’s lives as if they were a play or mural. It was as if we were in a museum, learning about a distant civilization. I wasn’t connecting as a human being but as one species studying another species. I put my camera away and leaned into that uncomfortableness. The truth behind it is that this community had come to an agreement on using their unique landscape as a place to earn money. This system provides jobs and was an intentional choice by the people. The disconnect comes from our approach; when I use the camera instead of my eyes we sometimes lose that ability to connect with others. In some cases, a photo preserves something, but not if it hasn’t been experienced without looking through the camera lens than that moment is not a connection, a relationship, or a moment but rather just the sound of the click and a cool photo to wave around.

Gwyneth’s reflection on The High Road: 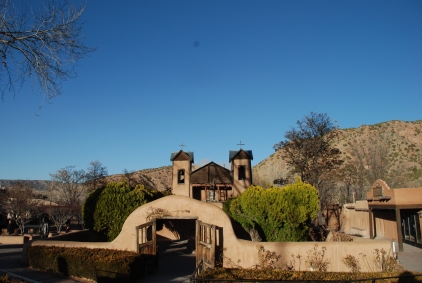 At one point as we drove along the turquoise trail, Ed (our guide) told us that the next 50 miles would change our lives. For me, this was absolutely true. The whole experience was unlike anything I have ever encountered and it will be impossible to do it justice in writing. To begin with, the scenery was magical. The road wound through the sprawling mountains, which dominate the landscape. Way up there, looking out the car window down at the valley below, I felt tiny among the astounding vastness of the New Mexico wilderness. But at the same time as I felt completely out of my element and intimidated by the rugged terrain, I also found myself strangely comforted. There is no way to look at beauty like that and not feel blessed to be alive to experience it. Although I am not a particularly religious person, I have no doubt that there is something spiritual about those mountains.

This spiritual element was made manifest by the various mission churches we saw along the trail. All of them were built in the simple and humble style of Spanish colonial architecture. Perhaps even more than the churches, the tiny towns we drove through demonstrated the strong spirituality of the people there – a mix of hispanics, natives, and some caucasians. Murals and graffiti on the sides of buildings show images of Jesus and the Virgin Mary. Colorful graveyards, their thin white crosses decorated with rosaries and fake flowers, sit on the edges of the towns. The mountains are filled with a strong and vibrant spirituality.

By far the most powerful spot we visited was Chimayo, a well-known Catholic pilgrimage site. In one part of the town, seven large stone crosses stand, each adorned with numerous smaller crosses placed there by visitors. Even more small crosses, many containing prayers and images of the Virgin Mary, hang along a fence surrounding this area. Several small shrines stand nearby, where people have hung rosaries and placed candles. Up a hill from this spot, we came across a small church , El Santuario de Chimayo, which was open to visitors. We were not able to take pictures of the interior, and it is difficult to put into words the power it conveyed. In the traditional Latin American style, the religious art conveyed a sense of vibrancy and joy at the same time as it was solemn and thought-provoking. I could have sat inside that little church all day, just taking in the imagery.